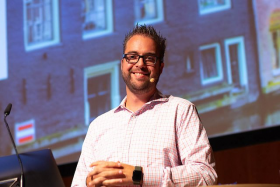 Dries is the co-founder  CTO of Acquia. He also co-founded Mollom.

From Belgium( Antwerp), Dries moved to Boston in the United States in 2010. He is an avid Open Source and Open Web enthusiast and holds a PhD in computer science and engineering from Ghent University.

The main force behind Drupal, Dries is firmly and surely navigating Drupal to be a leading player in the digital transformation happening globally.