“Though to some, this might sound like a crazy idea to talk about, we will still talk about it.”

That was the opening statement of Dries when he chose to speak about Drupal 11 during his Driesnote at DrupalCon Portland 2022. He spoke about their purpose, vision, strategy, and initiatives through his talk. Now that things with Drupal 10 seem to be moving in the right direction, it’s time to start working and developing Drupal 11.

Dries Buytaert is the founder of Drupal and a co-founder and CTO of Acquia, the company leading Drupal development.

“Purpose is a topic near and dear to my heart because the reason why I contribute to Drupal has evolved. It’s different from when I started the Drupal Project. And purpose is a big part of it.”

He prides on the fact that Drupal has made the Web better. In the last 20 years, Drupal has significantly impacted the Web. It is more than just a CMS, and with its scale and reach, Drupal can help create a better Web than the one we have today. We can help make sure we are building the best version of the most important public resource that we have today.

Dries wants to see an open web where people can express themselves and be creative, a place that isn’t homogenous. The Web used to be a palace with millions of unique experiences and serendipity and Dries wishes for that to continue.

Dries talked about wanting his kids to interact with the Web in a safe space. He wants a web-based on security and data privacy. Dries said,

“I want a web that is for everyone, that is inclusive, that is accessible, that’s multilingual and global because the world and web are global.”

One out of 30 websites (reportedly) runs on Drupal. It means that Drupal has a ton of influence on the Web as a community. And that’s why he contributes to Drupal.

“If you as an individual don’t contribute, then you should consider doing it”.

Dries recalled five-year-old Drupalcon Baltimore, where he proclaimed, ‘Drupal is for Ambitious Digital Experiences’. He believes that is a good phrase to use as it matches the flexibility, scalability, and speed that Drupal provides. After he made that statement back in Baltimore, they invested in the headless solution, media layout builders, and many other things to help people build Ambitious Digital Experiences. Today, he feels the community has achieved that goal. It was time to update Drupal’s vision.

Drupal’s routes are about empowering site builders to build ambitious websites with low-code or no-code solutions, Dries said. People fall in love with Drupal because they can create powerful websites relatively faster as they can do it through the User Interface. And because Drupal is open-source, they can also make changes to it as they go ahead. UI is powerful, but it becomes more powerful when combined with custom code combinations. It gives Drupal a unique position.

It also led Dries to think more about what is an ambitious site builder. To him, it is someone who does many things in UI but can also write custom code. These site builders sit in between Developers and Content Authors. They download, install and update modules and drag and drop things together. According to him, this is why Drupal became so successful. 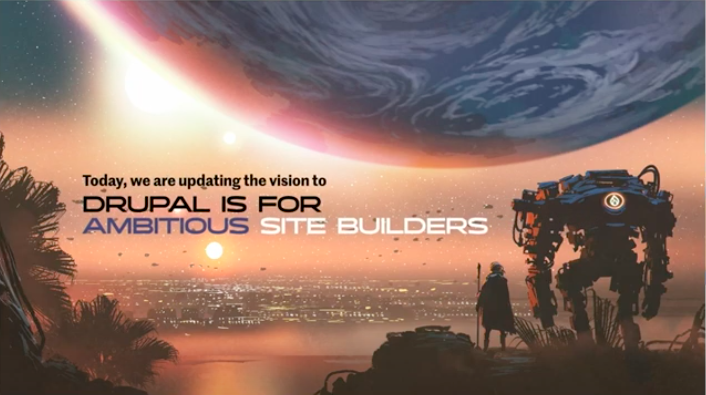 It is more specific and less ambiguous than Ambitious Digital Experiences. It has more heart and aligns better with Drupal’s purpose of enabling an open web. It is also based on a persona, as it is easier to care about people than about digital experiences.

Sticking to a reasonable time frame of two years, Dries then discussed the Drupal 11 strategy. The first thing he talked about was empowering the Ambitious Site Builder persona. Like Dries said earlier, an ambitious site builder works with modules. With so much innovation in Contrib, Drupal has around 8,000 modules for Drupal 9. There is so much to discover.

These modules are hard to find, and you don’t know about them unless you hear them from someone or attend an event. Drupal has even lost users because they don’t know where to go after installing Drupal core. And the solution to this is Project Browser, a strategic initiative announced a year ago. It is an opportunity to make great innovation easier to find.

Dries said that the vision is simple, to recommend or highlight great modules to install and enable users to discover these modules from within Drupal without going to Drupal.org. They also want people to be able to install modules at the click of a button rather than using composer. Leslie Glynn, in her video, talks about the Project Browser Initiative and explains how it will make finding and installing modules easy for new Drupal users. She talks about MVP, automatic installs via composer, additional filters, expanding search, categories as key filters for finding modules, updating modules, improving project pages, and UI improvements.

The Project Browser Initiative focuses on individual modules. A user will need over 30 or 50 modules to create a website, and each of them will need to be configured separately. To make this easier, they have the Starter Template. It is a novel initiative. They could be thought of as Distributions for the kinds of modules users need and can be implemented as composer.json files and a few configuration files.

But, Starter Templates would be much simpler and better. For example, the modules for an event site or a product site will be different, and users can choose a starter template from scratch or browse them to select the one that fits them the best.

They plan to make the Starter templates available in the project browser allowing users to stack and combine multiple starter templates. Users can mix and match the modules they need at any point in time. It will help your website grow with your company.

The last opportunity is to make updates easier. The solution to this is Automated updates which Dries talked about in Drupal 10.

Dries then moves on to talk about accelerating innovation by empowering contributors. The first one here is offering users better tools, and the solution to this is GitLab initiatives. He said,

“We are moving away from our own home-built, homegrown solution to GitLab. We are doing so responsibly so that we don’t lose out on initiatives and features that are unique and important to Drupal. Like the credit system or the way, we package releases.”

Tim Lehnen talks in a video about the progress made toward the GitLab migration. He further details the transition from Drupal CI to GitLab CI, the transition to GitLab Issues, and the critical challenges in this transition. Tim says they want to streamline and modernize the contributor experience with this initiative.

The next ample opportunity that Dries talked about is making the core smaller. The plan is to move modules out of Drupal Core to Contrib. This move is so that there is less code to maintain in the core, and then there is space to focus more on innovation that users want them to work on. Plus, specific modules can innovate faster in Contrib.

Answering ‘How many modules should we move from core to Contrib?’ Dries talked about the four foundational capabilities that Drupal has to have:

There are concerns like module quality, compatibility, and upgrade effort, but these will be dealt with, with the help of the solutions mentioned above. This initiative has been named the Great Module Migration.

This 2-year strategy will be called “Composable Core.” The idea is that Drupal will become smaller but more composable. It will help Drupal promote innovation, compose different sites, and be faster.